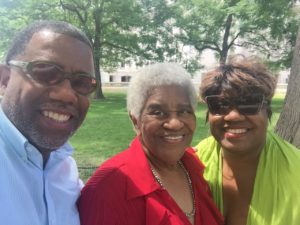 The most brilliant individual I know is being slowly kidnapped from me, emotionally!

Alz.org Definition: Alzheimer’s is the most common form of dementia, a general term for memory loss and other cognitive abilities serious enough to interfere with daily life. Alzheimer’s disease accounts for 60 to 80 percent of dementia cases.

Alzheimer’s Disease is a bitch!

About eight years ago, during lunch with my sister and mother, my sister announced that she wanted to share something very serious with us. She stated that she had been witnessing some major changes in mom’s reasoning abilities, linear thinking, and ability to follow familiar driving directions.

Though it was not apparent—I hope, I immediately became angry and defensive. Although I know my sister to be very level-headed and sober in these tense family-truth moments, I was upset with my sister for suggesting—diagnosing—something so ugly and severe.

Mom, of course, looked incredulous and horrified. She became extremely defensive and insulted as though her intelligence had just been called into question. To my sister Lilada’s credit, she remained calm. As a social worker for nearly three decades, she certainly has had experience conveying bad news to families. My mother, a brilliant retired social worker and family counselor, was not used to being “diagnosed.”

I would remain in denial until my mother accidentally set her house on fire in 2011—the home in which she raised my family. Mom left cooking oil on the lit stove as she went to the bathroom. She returned to the kitchen to find it ablaze. After unsuccessfully battling the fire she had set, she had the presence of mind to escape the house barefoot to call me—by memory—from a neighbor’s phone.

“Hey Alex, this is mom, ummm the house is on fire.”

My mother, the quintessential strong Black woman, seemed so small and unstable as I pulled up at her home among all the firetrucks and firefighters and road block signs.

The journey continues. My mom, and family, are still coping with the disease and its ramifications. Believe me, when one family member is diagnosed with this ugly disease, loved ones bear some scar of the illness as well.

I have not gone public with my mother’s diagnosis. Some days I tell myself that I hide it because I want to protect her image and reputation. Other days I am more truthful and I admit that if I were to name it, I would be conceding the fact that my mother is truly sick.

I have only publicly spoken openly about my mom’s disease two or three times. Recently, however, I sat on a panel for the Wisconsin Alzheimer’s Disease Research Center where I addressed a small group of overwhelmed caregivers about the need for self-care. I realized today that a part of my self-care will be avoiding the stigma, pain and occasional shame of having a parent who suffers from Alzheimer’s Disease. My mother has never, at any point in my life, ever been ashamed of me or any of my issues. Who am I to keep her from the many friends who wonder where she is and how she is doing? I have often told myself that it is her story to tell, however, she can no longer tell it, so I must.

For this reason, I plan to dedicate part of my blogging insights to my journey with mom, and Alzheimer’s Disease. My mother’s disease has caused me to shed many tears and to suffer restless nights. On occasion, I often wonder what this disease might mean for me in the future. Notwithstanding, and in the meantime, my mother remains physically well in her body, unfiltered in her speech and unfazed by the hectic world around her. This keeps my life very interesting and even more unpredictable.

Alzheimer’s Disease has taken much of my mom’s memory away from her—I can’t help that, unfortunately. However, what I will not allow Alzheimer’s Disease to do is to take my memories of her away today. I will have the rest of my life to mourn. Today I choose to laugh, tease, photograph, journal and appreciate the fact that my mother is still with us.

My mother has Alzheimer’s Disease—but it doesn’t have her!

When you lead with love & boldness, you produce a relational and effective authority, rather than a controlling authority #Geeisms

Please go to the Instagram Feed settings page to create a feed.