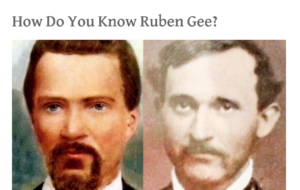 As an armchair genealogist, I have always been interested in the origin of my last name. I discovered years ago that my great-great-grandfather, my grandpa’s grandpa, Henderson Gee, was a slave. What I didn’t know was that Henderson’s father, Reuben Gee, was a Welsh slaveowner and the rapist of Henderson’s mother, Venus.

Last year I met, John, Reuben’s great, great grandson, on ancestry.com. We discovered that Henderson was the half-brother of John’s great grandfather, Robert Lafayette (R.L.) Gee. That means that we are the descendants of brothers! John and I decided to meet up at John’s home in New Orleans to discuss our family’s—and America’s—racial history.

NPR decided to do a story on our family’s meeting. Here are the links to that interview that will air on 220 NPR stations this weekend. Check out NPR’s To The Best Of Our Knowledge (TTBOOK) media pages for the interview and Gee family slideshow.

Audio, text, and a slideshow for the interview are available at: https://www.ttbook.org/interview/how-do-you-know-ruben-gee

The most brilliant individual I know is being slowly kidnapped from me, emotionally!

Alz.org Definition: Alzheimer’s is the most common form of dementia, a general term for memory loss and other cognitive abilities serious enough to interfere with daily life. Alzheimer’s disease accounts for 60 to 80 percent of dementia cases.

Alzheimer’s Disease is a bitch!

About eight years ago, during lunch with my sister and mother, my sister announced that she wanted to share something very serious with us. She stated that she had been witnessing some major changes in mom’s reasoning abilities, linear thinking, and ability to follow familiar driving directions.

Though it was not apparent—I hope, I immediately became angry and defensive. Although I know my sister to be very level-headed and sober in these tense family-truth moments, I was upset with my sister for suggesting—diagnosing—something so ugly and severe.

Mom, of course, looked incredulous and horrified. She became extremely defensive and insulted as though her intelligence had just been called into question. To my sister Lilada’s credit, she remained calm. As a social worker for nearly three decades, she certainly has had experience conveying bad news to families. My mother, a brilliant retired social worker and family counselor, was not used to being “diagnosed.”

I would remain in denial until my mother accidentally set her house on fire in 2011—the home in which she raised my family. Mom left cooking oil on the lit stove as she went to the bathroom. She returned to the kitchen to find it ablaze. After unsuccessfully battling the fire she had set, she had the presence of mind to escape the house barefoot to call me—by memory—from a neighbor’s phone.

“Hey Alex, this is mom, ummm the house is on fire.”

My mother, the quintessential strong Black woman, seemed so small and unstable as I pulled up at her home among all the firetrucks and firefighters and road block signs.

The journey continues. My mom, and family, are still coping with the disease and its ramifications. Believe me, when one family member is diagnosed with this ugly disease, loved ones bear some scar of the illness as well.

I have not gone public with my mother’s diagnosis. Some days I tell myself that I hide it because I want to protect her image and reputation. Other days I am more truthful and I admit that if I were to name it, I would be conceding the fact that my mother is truly sick.

I have only publicly spoken openly about my mom’s disease two or three times. Recently, however, I sat on a panel for the Wisconsin Alzheimer’s Disease Research Center where I addressed a small group of overwhelmed caregivers about the need for self-care. I realized today that a part of my self-care will be avoiding the stigma, pain and occasional shame of having a parent who suffers from Alzheimer’s Disease. My mother has never, at any point in my life, ever been ashamed of me or any of my issues. Who am I to keep her from the many friends who wonder where she is and how she is doing? I have often told myself that it is her story to tell, however, she can no longer tell it, so I must.

For this reason, I plan to dedicate part of my blogging insights to my journey with mom, and Alzheimer’s Disease. My mother’s disease has caused me to shed many tears and to suffer restless nights. On occasion, I often wonder what this disease might mean for me in the future. Notwithstanding, and in the meantime, my mother remains physically well in her body, unfiltered in her speech and unfazed by the hectic world around her. This keeps my life very interesting and even more unpredictable.

Alzheimer’s Disease has taken much of my mom’s memory away from her—I can’t help that, unfortunately. However, what I will not allow Alzheimer’s Disease to do is to take my memories of her away today. I will have the rest of my life to mourn. Today I choose to laugh, tease, photograph, journal and appreciate the fact that my mother is still with us.

My mother has Alzheimer’s Disease—but it doesn’t have her!

Our elders believed in respecting elders. Therefore, when they said something, they felt that we should listen and take heed. They also strongly believed that younger people should learn from their experience and benefit from their hard-earned wisdom and gorgeous gray hair.

For this reason, when we rejected the sage wisdom of the elders, and it blew up in our faces and created a huge mess—their response to us was often: “You don’t believe fat meat is greasy, do you?!”

In essence they were saying, “That’s what you get for not listening. You think you’re smarter than us just ‘cause you got yourself some education! You don’t believe anything you’re told until it jumps up to bite you, and then it’s too late!”

With the invention of internet and creation of google, it is sometimes hard for me to pass along wisdom from my generation to my daughter’s. I might have to dust off this saying and revive its use.

“I Shoulda Listened To My First Mind!”

Older African American people were often extremely intuitive. One of the gifts they used to navigate such a coded and invisible, unjust systemic reality, was to listen to the inner voices of their souls. They tried to teach us what they had learned as a survival tactic, so they often said, “When you’re makin’ a big decision and don’t know what to do, or which way to go, listen to your first mind and go in that direction.”

The intent of our leaders was to help us avoid second guessing and unnecessary mistakes.

Today, too many folks in our community err by taking routes that seem easier, or popular. Our mere existence is proof that we are an original design, so why do we waste such precious time trying to follow the paths of others that weren’t necessarily meant or cleared for us?

Old folks used to admonish us to slow down, be still, quiet ourselves, and listen to that inner voice… that first mind, and do what it says. We’re likely make more informed and mature decisions if we do.

Are you facing a major decision? Do you need direction? Try some of the wisdom of our elders today. Slow down so that you can hear, and respond to, your first mind.

Stay with me, please. I am not attempting to commit the civil rights equivalent of the unpardonable sin. I wish to make a point.

My love for MLK is undeniable.

I admired King on television as a child. I remember being sent home from kindergarten on Chicago’s westside the day he was assassinated. I watched the flames of looted buildings from our third floor apartment building windows as grief stricken (and some opportunistic) people torched Chicago’s busy streets.

“Who will lead our marches now?”

“Who could challenge local, state and federal leaders now?”

“Who’d fill the shoes of assuring our dignity and legacy as Black people now?”

“He was so articulate!”

“He could speak about voting rights for Black and still voice our ‘American’ concerns about the Viet Nam War!”

The world paused in mourning…and the hyperbole began.

END_OF_DOCUMENT_TOKEN_TO_BE_REPLACED

I function in a society where I live out my public life as a pastor, author, networker, healer, social-entrepreneur, activist, coach, organizer and teacher. I love those aspects of my work. However, I am also a husband, a son, a dad, a thinker, a poet, a storyteller, a seer, an adventurist, a theologian, a muse and occasional mystic!

I need a place to break out of the box of being type cast and pigeon-holed. I need sacred space to address issues that press on my heart and mind…not just my skin and culture. I have owned the need to bring all of myself to the table, one which I get to set, arrange and invite others to. This is precisely why my communications team and I have created AlexGee.Com – a place of spiritual, cultural, emotional, intellectual, professional and relational contemplation and integration.

This one stop site is my place for authentically sharing myself and my ideas with the world, in hopes that people will become inspired to become their best and higher selves as they journey with me as I pursue the same.

I would love nothing more than to know that my blogs, #Geeisms (my pithy inspirational insights) and soon-to-be-released podcast may become tools with which people navigate this treacherous world with hope and a renewed sense of purpose and worth.